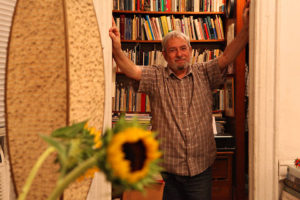 This year people in the poetry community discovered it and were upset that I talked about the unscrupulous and nasty things that he did, such as sexually harassing me, not just the nice and good things. I got the message.

Whether or not what I wrote was true, my silence on my experience is more important to them than the truth.

Here’s Taleb’s take on that.

1. Risk takers can be socially unpredictable people. And they take risks because it is in their nature as wild animals.

2. English “manners” were imposed on the middle class as a way of domesticating them, along with instilling in them a fear of breaking the rules and violating social norms.

3. It isn’t what you have, it’s what you’re afraid of losing. (I never had the regard of the dominant poet class of white dudes therefore I do not have to worry about losing it.)

4. You’d rather have a real person with visible deficiencies than a lifeless non-risktaking analyst. (Would we all want a sanitized Larry, brushed and shined for the masses? Does that honor who he really was? He didn’t like his wife. She was the first speaker at his memorial. Would he have wanted THAT?)

5. An Intellectual Yet Idiot (IYI) condemns others for doing things he doesn’t understand while not realizing it is his understanding that is limited. (Maybe I’m not writing an obituary for anyone but myself. Maybe I’m trying to exorcise his demon from my shoulder, and get away from his influence.)

6. IYI knows at any given point in time what his words and actions are doing to his reputation.

7. You can define a free person precisely as someone whose fate is not centrally or directly dependent on peer assessment. (My cashflow is certainly not dependent on any one institution, poet, or loose affiliation of individuals like the NY Poetry school).

8. A free person does not need to win arguments, just win. (You can argue about who Larry was all you want. I’m not interested in engaging in something stupid like an argument about my personal experience and what I have a right to say.)

10. Someone with a high public presence who is controversial and takes risks for her opinions is less likely to be a bullshit vendor. (The entire premise of my business is that you must speak the truth, even when your voice shakes. That’s what being Wild means to me. And I wish I had spoken up more around Larry, but I was young and didn’t know how to. And then learning that he preyed on young women made it all the more important for me to speak up.)

11. It is much more immoral to claim virtue without living with the direct consequences. (It’s easy to snipe at someone from the corner because you disagree with what they said, even if it was true, rather than dealing with them plainly.)

12. Sticking up for the truth when it is unpopular is far more of a virtue because it costs you something. Your reputation.

13. Unpopular acts signal some risk taking and genuine behavior. Courage is the only virtue you cannot fake. If I were to describe the perfect virtuous act, it would be to take an uncomfortable position, one penalized by common discourse. (Based on the looks I got at the memorial service, I think most of the people who read the obituary would rather that I left. I did leave, because I had another place to be. But not because of their approbation.)

From Skin in the Game, by Nassim Nicolas Taleb

I can tell you right now that Larry Fagin did not mince words. If something was shit, he was open about it. No matter who wrote it. Up to and including John Ashbery. I am exercising the same right not to mince my words about who he was, and what he did, to me and to other women, which includes sexual harassment, stealing money, and generally being a jerk. I told Eileen Myles in 2010 I was Larry’s student and she said, “Larry Fagin is an ASSHOLE!” and walked away. I was completely unaware of his reputation with women in the poetry community. Then I started to get an idea of who he was.

When you read my obituary, you can see that I had complicated feelings about the man. Larry Fagin definitely made his students dependent on him. At the same time he was incredibly generous. And then I don’t think he ever saw women as real people. I do know that he had lots of powerful male poet friends that he never introduced me to, but who all seemed to know each other. The message was clear. It’s THEIR club. YOU’RE not invited.

Larry Fagin was a talented person. He was also a fucked up person. Both of those things can be true. This is my unpopular act.

Maybe now that you’re here, you’d like to read more about true women’s stories of sexual assault and harassment. Here you go!

I was sexually harassed. Question my story.

How one female chef ended sexual harassment in her restaurant