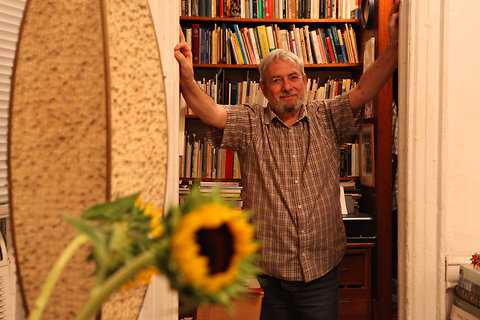 I should have prepared this ages ago. I knew my teacher was in hospice. but for some reason, I didn’t. maybe because I felt so weird about the whole thing.

My teacher, Larry Fagin had cancer of the esophagus that spread to his lymph nodes, groin, and bones. He was diagnosed two years ago. Larry Fagin died on May 27th, 2017 at 9:24am.

He was born on July 21, 1937. He used to tell me on my birthday, “You’re So Old!” He was a 7 of clubs and 9 of hearts in the Destiny Card system, my sun cards. That meant I would have a hard time defying him, and would always see him as the leader. He certainly would never see me as a peer, or as anything but a subordinate. Or a sex object.

I first started studying with Larry when I was 21, just out of college and looking for a way to continue to learn about writing. I found a catalogue for the Poetry Project while I was wandering around the east village one afternoon, and found Larry’s Manuscript Development workshop in there. (I later found out he was one of the founders of the poetry project, and when they would ask him for a donation at a reading, he would retort, “I don’t have any money! I never have any money. I fucking founded this place.”)

I decided to apply. I sent him my senior project, a handmade poetry chapbook with a hand painted watercolor cover, bound with fishing line.

A few weeks later I met Larry at De Roberti’s restaurant (now closed) in the East Village. He was sitting at a table in the back, with mirrored walls all around us. I remember his intense, dark eyes in the restaurant, and his shock of white hair falling over his forehead. I ordered my first cannoli and joined him.

He gave a sense of vitality, movement, and potential- he was so multi-faceted! His range of conversation covered contemporary movies, books, dance, music, and back to the 20s. He was the most unconventional, hip old person I’d ever met. And he took poetry so seriously! I’d never met someone who dedicated their life so completely to the craft. He told me that despite majoring in poetry, I was “ALMOST” able to write poetry.

He said a lot of things during that meeting, but the last thing he said to me was, “What’s the most important thing to do?” I said, “Surprise yourself.” He said, “Congratulations you’re in the class.”

During the class I had the most remarkable time. He had us “translate” Chinese poetry phonetically, and from the characters. He gave us crazy reading lists and movie lists. His Neglecterinos list is legendary. We had an assignment to write in the morning for 20 minutes no matter what. I did this on the train at 6am, sometimes falling asleep as I wrote. Larry got tears in his eyes if I chose the wrong anthology of Frank O’Hara poetry.

He got so worked up about poetry. Nothing was sacred. So he also drove students away.

I started studying with him after the class to glean more knowledge from him. He had known Ginsberg, had corresponded with Charles North, had even studied with Jack Spicer, and knew all the current greats-Ron Silliman, Ron Padgett, Joanne Kyger, Bernadette Mayer, and he seemed to be helping poets around him make their careers too. He published a little poetry magazine called Sal Mimeo in the 60s and early 2000s, and curated little books through a press called Adventures in Poetry. Larry wrote a book called The List Poem, based on his time as a Teacher’s and Writers poetry teacher in NYC’s public schools. It is one of the funniest books I’ve ever read. And it’s helped me write lots of poems.

I really liked working with him at first. Then he started hitting on me. I told him no. “Don’t say no” said Larry. “Say maybe.”

We got closer. I used to clean his apartment for him, and if his wife was away, sometimes I would sleep in her apartment and hang out with Larry for a weekend day.

The high point of being his student in the year after the class ended was me driving him up to Storrs Connecticut to go to the University of Connecticut’s Frank O’Hara letter archives. I remember he brought a tape with him that he’d bought at the train station, it was Abba. He’d never heard Abba before. And we put it in the tape player and after a minute or so he got so disgusted that he threw it out the window. I laughed so hard that day.

Once we got there, I didn’t have permission to see Frank O’Hara’s letters, but he let me look at boxes of his own letter archives. I couldn’t believe he wrote a letter to Henry Miller, and Henry Miller wrote back! I loved Ron Padgett’s letters the most. I liked them more than his poetry. I photocopied a couple of the mimeoed letters for myself. In the end Frank’s sister wouldn’t let him publish a book of Frank’s letters, so that project ended there.

Unspoken under all of my time with him, I wanted to get introduced to all of the famous poets he knew.

That never happened. He did send my poetry to them occasionally.

Working with Larry had its perks. He included me in his anthology, “Like Musical Instruments,” and sent my poetry to “The Hat” a small poetry magazine with a very short run. He helped me publish my two chapbooks, “OK to GO” in 2001, and “The Faberge Wrecking Ball” in 2010.

I thought he was the best teacher in the world, and I tried to get other poets to study with him. They did not respond well to that. In fact most were offended that I thought that their precious words needed editing. I thought they had no idea how bad their poetry was until it got a good snip.

I went to a reading with a famous poet, and she told me Larry was an asshole. I had no idea why, until much much later.

I got the details long after I stopped working with him, but from what I heard, he had a bad reputation in the poetry community. Having sex with an underage girl that got him banned from Naropa Poetry School. Being vile to his wife, which led to some of her psychological problems. Constantly trying to have sex with his female students, and sometimes succeeding. (Not with me, but others that I met.) Making the most of a skewed power dynamic.

His business was predicated on trying and succeeding to make his students feel dependent on him, because “nobody can edit themselves” and “everyone needs an editor.” He would make changes and not explain why, to keep this going. I believed this for years.

I started and stopped working with him on and off over the years since the class, and it was usually because I felt like his meal ticket more than his student. He would not work on my poetry for a month and still demand money for the month. And I said no. And he would just stop emailing me.

Eventually when I heard he was ill I wanted to do one more chapbook with him, and I sent him $1,000, and then he did nothing, and I decided to just view it as a donation to his medical care.

I wrote him a letter and emailed him a few times but never got a response.

Later, someone told me that Larry had peripheral neuropathy in his hands, which made his fingers feel like lumps of wood. He couldn’t type, but he appreciated email, he told me.

In the last few months of his life, I didn’t email him. I guess because after I found out about how much he abused women, and tried to keep his students dependent on him, I couldn’t think of what to say.

I stopped writing poetry for awhile after this last abortive attempt to work with him. I’d been writing for him for so long I didn’t feel like writing if he wasn’t going to read it.

But now I feel like I can write again.

What comes to me now is a sense of freedom.

A freedom that now I don’t have to write for him anymore.

I can write for myself. And no one can tell me if it’s good enough or not.

Am I sorry I met him?

No. I am grateful to have a piece of history, of the Beats, as my lineage, as a grandfather I could study with. I don’t know what I would have done without Larry Fagin’s support to write poetry. I would probably have stopped after college. But since I left I’ve kept writing it, and getting better at it.

Now I teach people how to write as well, but I try to be different than Larry, by explaining exactly why I made each edit, and hopefully teaching them the principles of good editing that way. I don’t want them to be dependent on me.

I really cared about Larry, and I just assumed he’d live forever, and I could go to see him again whenever I was back in New York.

When I found out all of the unsavory parts of Larry Fagin’s past, I just didn’t want to try to see him anymore. Maybe that was more cowardly than anything, but after 50+ years of treating women badly, I just didn’t think what I said would change anything.

Once I was looking at him in the sunlight, and I said,

“I don’t know what it is about you, but you brighten and sharpen everything!” and he said,