Now empty windows
make the ashes solid
but what about the barrels of fire?

Your rhythm
your hollow brain

Women listening to bodies like alarm clocks
drinks? food? check?
everything is artificial and very real

White haired man sips his beer
when the game draws his eyes up
hey lemme give ya a proper squoze!

My name is paul and my poems
echo in the printing press
my name is rick and only the homeless
may see my poems
my name is julie and i have misplaced my cherry
my name is sandy and you can look right up
my nose
my name is steve how time flies
it doesn’t even blow me a kiss!
my name is lucky i travel first class.
hi I’m mathleen jortstein
my name is mjolnir goatking
my name is written under the pine boughs
pick it up and bring it to me 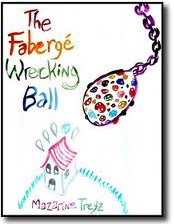 Puffery:
Mazarine Treyz graduated Bard College with a degree in Gender Studies and Poetry. She later learned that in Saudi Arabia, poets lead revolutions and become kings. This is all in the tradition of Parmenides, but of course you already knew that.

After college, Treyz studied with Larry Fagin at The Poetry Project in NYC and published two poetry chapbooks: OK TO GO (2001) and The Faberge Wrecking Ball (2010).

I guess there’s no hiding it, is there? She identifies as a writer.

Her poems have appeared in The Hat, The South African Jewish Review, and the Des Moines Times Picayune Gazetteer.

“Why do we write poetry?” and the answer was “To make a sound.”

What’s the most important thing?

To surprise yourself. Congratulations you’re in the class.

According to poet Paul Maziar, Mazarine wrote The Faberge Wrecking Ball and drew from her memories bursts of a sky alighting everywhere. Musical, nimbly shifting, funny, clear, adventuresome, Mazarine leaves no stone unturned in her quests: not for ideas for material- materialistically – but because she is a writer who loves to learn, from books and life.

But to spend time with Mazarine discussing books is a treat. She is a lover of language and story, speech and dream. And her poems reflect a keen eye and a great taste- never a dull reference; always a fun ride. From climate to her memories to friends and made up names, like all good poems, Mazarine’s poems ought to be collected, lived with, read and listened to.